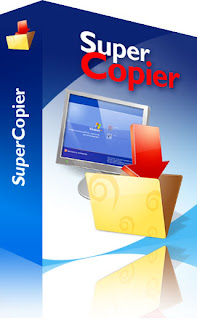 Time is the main problem of the modern society. Nobody wants to wait anymore, everyone is trying to deal with his/her problems as fast as possible like there is no tomorrow. Ironically, I always say that time and money are not a problem, but they obviously are.

When you are copying large files (files with more than 3GB of data), you see that time increases proportionally with the size of the file. When you are in a rush (and you usually are), the fastest way for you to finish is to abort the operation and say you forgot to bring the file. The other way that you can try is to install SuperCopier 2. This is an application from sfxteam and the best thing about it is that it doesn't cost you a single penny.

The main idea the software was built around is to replace Windows Explorer's file copying system, improving and
adding some extra features to it. Downloading and installing come and go in a blink of an eye, leaving you unwary of what the heck has happened. As you are probably aware by now, SuperCopier 2Beta 1.9 lies quietly in your system tray, without a great deal of memory consumption. If you are not used yet to its "copying methods", a double click on the program's icon will lead to its immediate deactivation. Enabling it is done in the same way, but you should really have a look in its Configuration menu. It might be exactly the edge you have been looking for.

Mentioning from the beginning that the program doesn't work on Vista (hopefully the developers will make the move on this, as well), on Windows XP I was able see some major improvements compared to the usual file browsers. The most visible one is the increased speed when copying or moving files from different locations of your hard drive.

If English is not one of your spoken languages there is nothing to be worried about. There is also a choice of French, Spanish or Portuguese for you to select from. As for the supported file types, even if you are using Unicode filenames you are still covered. NTFS rights of the files are preserved during copying or moving operation, but in case there are errors on the way the software does not ignore them and it has its own error handling method by saving a log file with all failed operations (either in Source, Destination or user defined).

When you copy a file, you will realize that there is not much difference between this program and another similar one. What is for you to see (a copy progress bar) is displayed on the monitor, but what is hidden is making the all the difference. First of all, it is a little faster, having a better speed computation. Secondly, the CPU and memory usage is reduced (compared to the traditional copying tools), which is better for systems with reduced amount of memory.

Having a transfer pause and resuming option, the application controls the copy speed and maintains its own log for errors. This can be saved as a text file in the source or the destination folder, or in any other directory you may choose. If you assembled a list of files to be copied, you could save it to a file and load it later at a convenient time.

As customization, well, there isn't much to customize since interface is reduced to New Thread and Thread List menus. From the program's configuration menu you can modify the colors of the progress bar. And we are talking here about foreground and background, text and border colors. Also from here it can be modified the displayed unit for the file's size.

And there are a lot more checkboxes waiting to be ticked, like choosing the copy speed limit or the default answer in case of file collisions or how to handle copy errors. In "Copies & moves behavior" new settings can be chosen regarding copy list handling, the attributes and security of files or deleting. A renaming feature is added here with the appropriate help in case you cannot handle the pattern.

Advanced parameters can be used such as SupperCopier process priority or the software's settings location. Changing the size of the used buffer or the throttle interval can get tricky for novice users, so a help file is attached to explain the produced impact on modifying these values. Not only Windows Explorer can be substituted by this program, but any other file navigator. All that needs doing is adding it to the list of processes that SuperCopier must handle.

As an overall, SuperCopier is a software which speeds up the copy process of your files, with a low CPU usage and memory usage. It can be activated or deactivated in no time and is very easy to use. Once you have defined your personalized settings they can be stored by the program as defaults from the Option tab within the New Thread ->Copy feature.


The Good
The program saves an extra bit of your time by reducing the time of the copy files process. It can handle a list of navigation processes and it doesn't leave unattended the copying errors that might appear. You can see and modify the list of files waiting to be copied.

The ease of use affects the settings customization so you can get the best of this software without being asked too many questions every time you are using it.

The Bad
The application does not have a build for Windows Vista. Although the installation is running on this operation system and you can see the icon in system tray, its features are not working and the Windows Explorer takes over.

If there is only one file is paused in the copying list, Skip does not bypass the current file canceling the operation but acts as the Resume button.

Pressing a button which involves a browse of the current HDD tree (like adding a new file or folder to be copied or saving the error log in a new file) opens a maximized browsing window which cannot be resized or minimized.

The Truth
With a lower CPU and memory usage than the usual Explorer, SuperCopier 2 seems to be a time-saving application. Don't expect to see a 10 GB file moved in an instance, but with quite a big number of large files the difference is obvious. Plus you can pause and resume the process whenever you like, without affecting the files' security and attributes. Minor glitches are to be code-repaired like the Apply button which doesn't turn grey once it is pressed.
DOWNLOAD
Post a Comment
Labels#System Utilities and Tweaks